All Fundriver clients can control their user’s access to their database by assigning USER TYPES in a user’s setup profile (SUPPORT/SETTINGS > USERS). There are four types to choose from (see below for detail of each), all varying from full access to read only. However, some institutions may need to apply more nuanced security to their user roles. The Role Manager feature in Fundriver (standard with a Fundriver Solution subscription) allows Client Administrators to create customized user roles that are built around the specific needs of the user.

These customized roles allow unlimited combinations of read, edit and report-only access based on specific Fundriver functionality.   These can all be controlled by anyone in the Institution's Client Administrator role.  This article explains how the Role Manager works within Fundriver. Please note that, although standard with your Solution subscription, this feature must be turned on. If you are interested in turning this feature on please reach out to Fundriver Support.

Once the Role Manager functionality has been activated, Client Administrators can access and modify roles through SUPPORT/SETTINGS > USERS.  Click on the ROLE MANAGER tab to create new roles and manage existing ones. 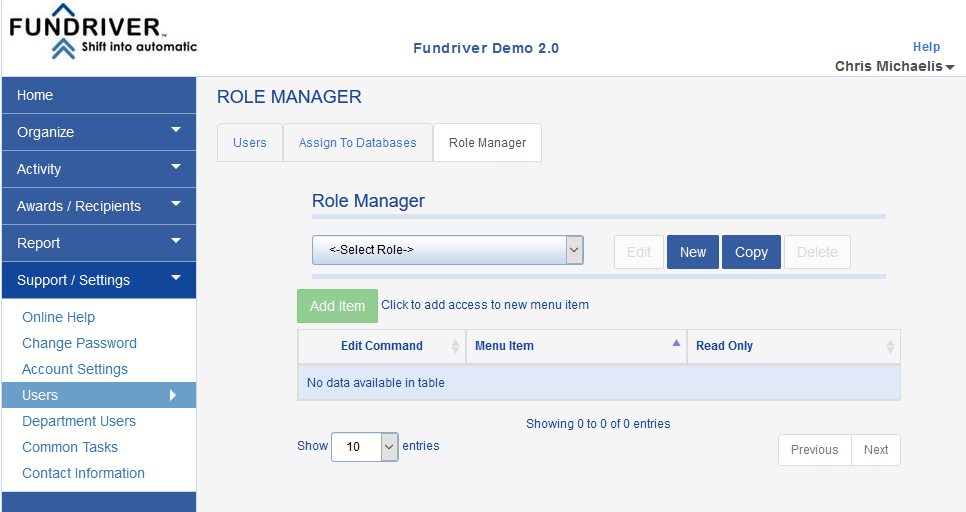 There are two options for creating a new role:

There are four existing roles that can be easily copied. These roles are as follows:

To copy an existing role, go to SUPPORT/SETTINGS > USERS > ROLE MANAGER and select the role to be copied. Once a role is selected, you can view the tasks and access associated with each.  To build on an existing role, click COPY. 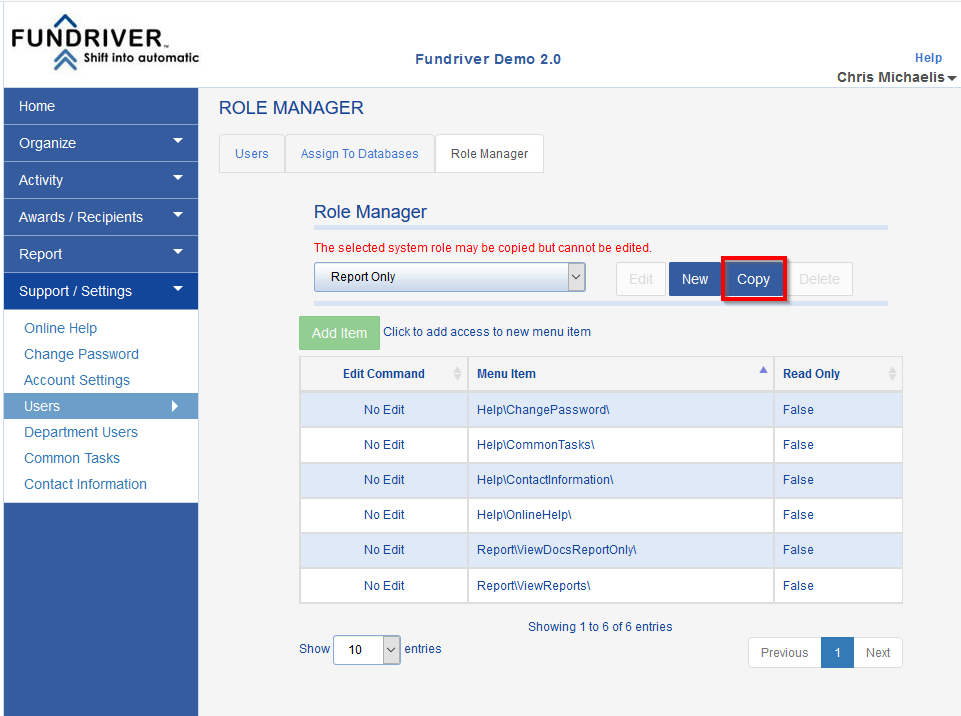 The program will prompt for a new ROLE NAME.  Once saved, you can edit the role.

Now, when the new role is selected, the administrator is able to EDIT, DELETE, or ADD ITEM to the role.

When copying an existing role, along with EDITING/DELETING the items already associated with that role, you have the ability to ADD ITEMS to the copied role. To do so, simply click the ADD ITEM button. This will  provide a list of functions by their location in Fundriver.  Choose the functionality to add to the role.

When a menu item is selected, a box will pop up.  Checking the READ ONLY box will make the item visible but not editable. Click SAVE to commit the item to the new role.

The new functionality should now appear in the MENU ITEM column. 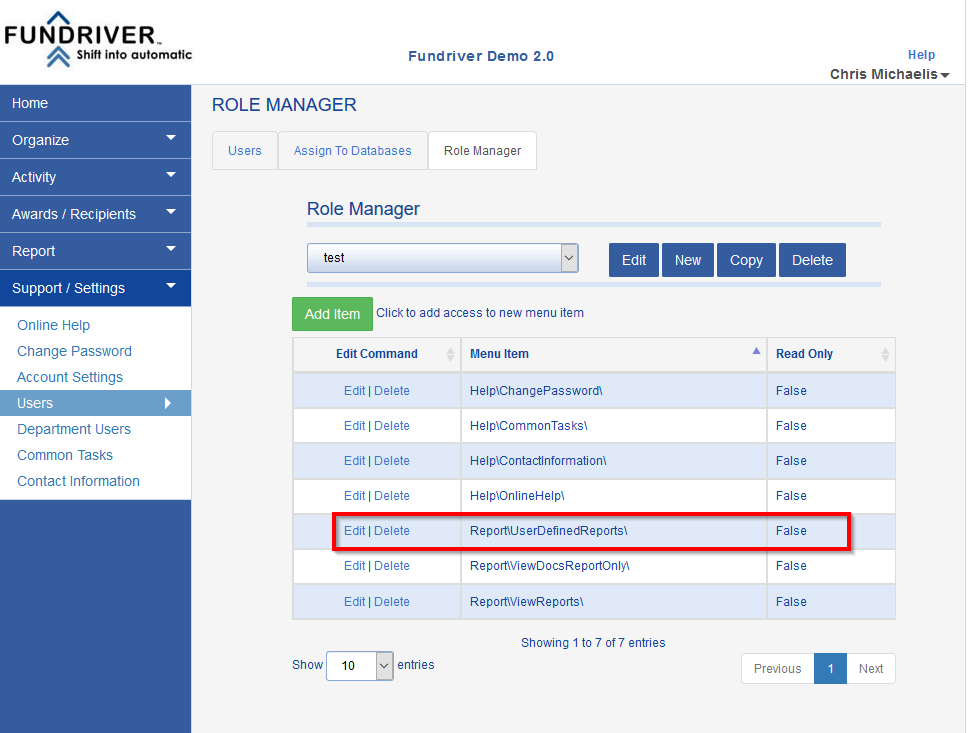 Repeat the process above until all functionality for the new role has been added.  Next, simply assign users to the new role (See section below: Assigning Users to New Roles).

Creating a New Role from Scratch

A new role can also be created from scratch.  To start the process, click on NEW ROLE from the ROLE MANAGER tab. 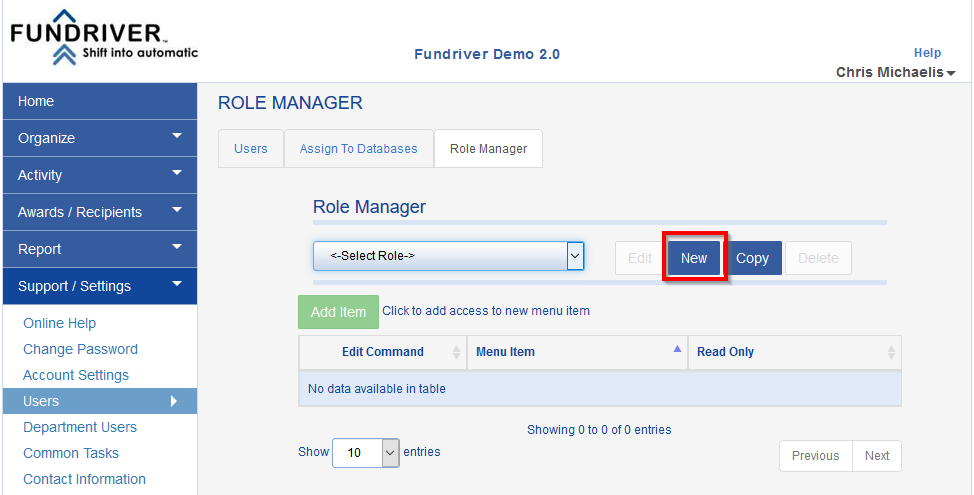 A prompt will appear to create a new ROLE NAME.  Once entered, click SAVE.

Choose the newly named role from the drop down and click ADD ITEM to build out the role. 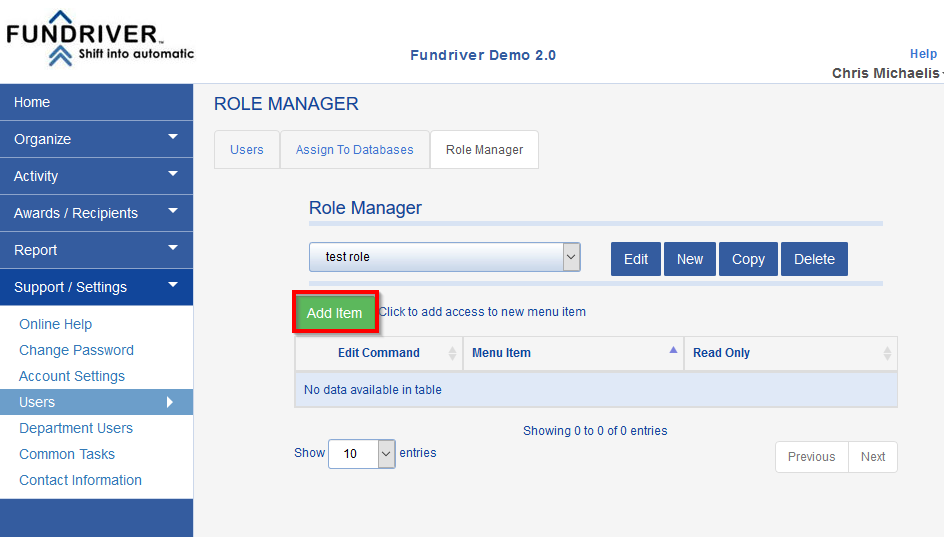 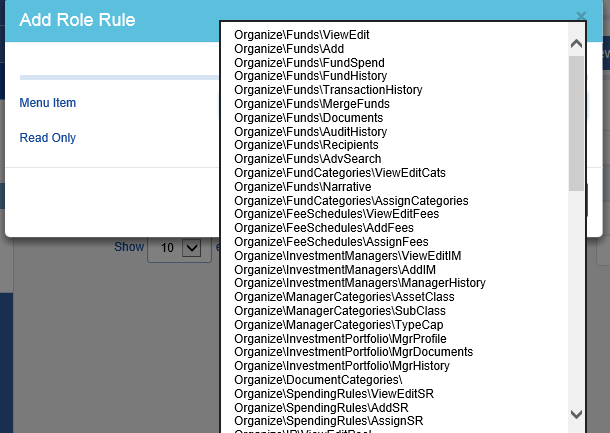 Next, choose whether the access is edit (default) or read only (check box).  SAVE the item.

Once saved, you will be returned to the menu item list for the new role.  Continue adding functionality until the role is fully customized to your preferences. 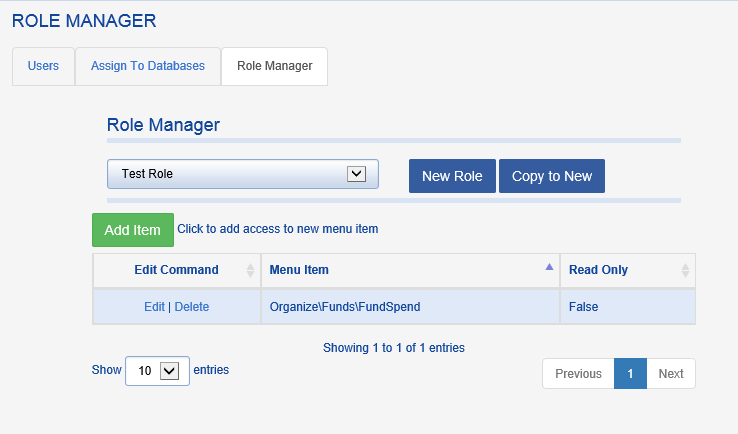 That’s it! Next, simply assign users to the new role (See section below: Assigning Users to New Roles).

Go to SUPPORT/SETTINGS > USERS. The new user role will appear in the USER TYPE drop down. Simply select (or add) the user and select the new role as the USER TYPE. Any Fundriver user can be assigned the role. 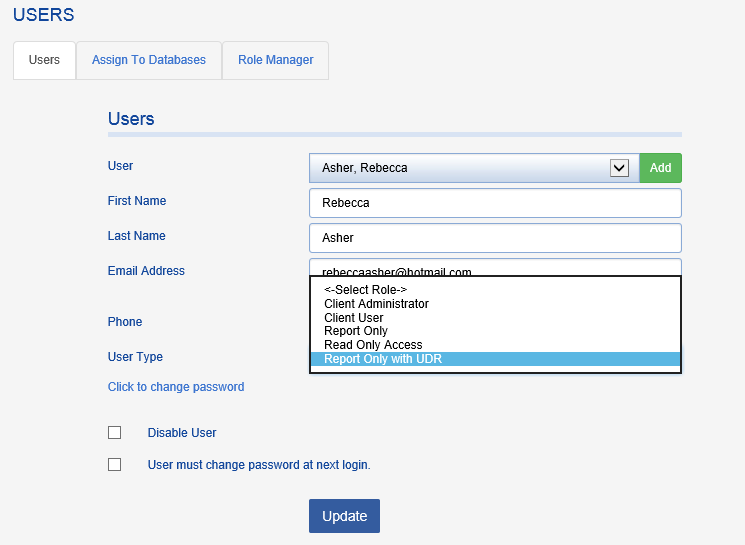 When the assigned user logs in to Fundriver, they will only see the sections to which they have been given access.  In this case, the user is set up for Report Only access with the addition of User-Defined Reports. An example of this view is as follows: 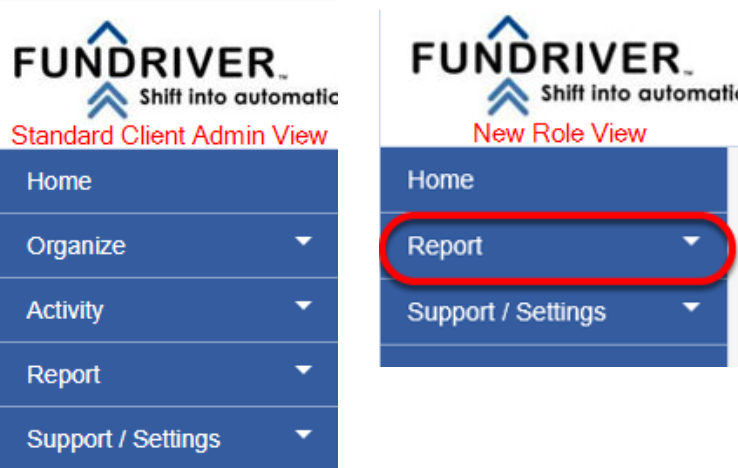 Additionally, the view below shows the addition of the USER-DEFINED REPORTS functionality to the REPORT ONLY user role. 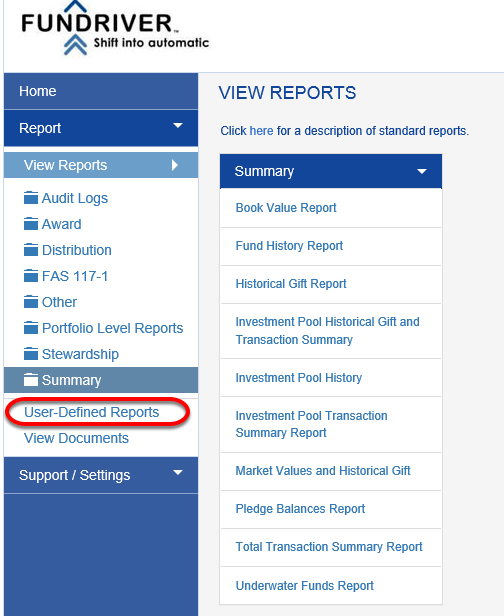 C
Cosley is the author of this solution article.